There are many forms of leisure, organised sports and even occupations where there are clear lines between deviant behaviour and that which is law-abiding, but that line can be blurred substantially when there exists a physical contest that is sanctioned. When violence is legitimised or permitted in any circumstance such as policing, security, the military or in sports, it could be argued that it ceases to be a matter of concern for criminologists, or those who study deviancy. However, there are many useful reasons for considering legitimate forms of violence as being deviant, or locating the discussion within the discipline of criminology. Indeed, the concept of legitimisation and the issues of power, money and law that surround it are integral to an understanding of the discipline itself and the study of violence that is not affected by criminocentric definitions of violence can be fruitful, as highlighted by Jackman:

Once we step away from the legal and moral imperatives that have shaped research on violence, we are confronted with the diverse and sometimes complex motivations that shade the variegated practice of violence in social life.
(Jackman 2002:400)

The fist-fight in ice hockey – deviant or functional?

Ice hockey is unusual in the manner that it permits forms of violence and pugilism both within the rules – and beyond the rules – within the culture of the game. There are no other circumstances within the UK where a bare knuckle fist fight would occur in full public view without drawing the attention of the police or authorities. In wider society, the bare-knuckle fist-fight has gradually retreated from the legitimate sphere through increased regulation of boxing and other contact sports, and by establishing stringent rules and lengthy punishments to those that engage in this kind of behaviour. However, in a hockey rink, a crowd composed of families, retirees, school children and even young babies will gather and watch a game in which fist-fights (and other forms of serious violence) are frequent and tolerated occurrences.

Violence in hockey is not the uncontrolled violence of an alcohol-fuelled street fight; neither does the fight constitute pre-meditated assault on an unsuspecting victim. The fist-fight in hockey is illegal according to game rules, yet is an implicitly condoned act that is accepted by the players, the spectators, the team owners and the referees as being ‘just part of the game’. An action that is not abhorrent to the majority of players and supporters, it is “socially-acquired normative conduct” (Smith, 1975).

Professional hockey players tend to be aware of their responsibility for physicality on the ice beyond that required for the simple scoring of a goal. Unlike many depictions of other types of violence, players are also able to utilise a degree of discretion in when to ‘behave’ and when to engage in violent acts beyond that allowed in the rule book (Colburn 1986; Bernstein 2006). Fighting in hockey is tacitly permitted by the relatively short penalty of five minutes in the penalty box (or sin bin). The lack of legal interest in this behaviour and the tendency for players, officials and leagues to allow the continuation of this element of the game is interesting as it is unique within the sport of hockey.

Hockey is a game of physicality and of violence. Violence in hockey is not necessarily deviant in the manner that non-sporting violence can be. Rather, violence is a necessary tactic that emerges from the counter-pressures of a contact sport played in an enclosed environment, with the presence of potentially injurious objects, where there is also the element of competition and a desire to win.   Hockey is a contact sport; the ability to compete in hockey contains the necessary physical element of playing the opponents body as well as the puck; of the physical domination of the body, as much as it is in scoring a goal on the net. It is a game and a culture where physicality is required and rewarded.   Here, physicality is inextricably woven into the celebration of success and of dominant, hegemonic masculinity. In order to understand the nature of violent and physical behaviour in this sport, it is essential to understand the culture that builds and reinforces this physicality – a culture that comprises not only the players themselves, but also includes spectators, the media, officials and team owners.

As society has become more civilised, the state’s increasing monopoly on the use of violence has led to a reduction in legitimate violent contests among the general public. With increased regulation in all areas of human life, the idea of a gladiatorial contest has become a historical matter. Many sociologists and criminologists (Elias and Jephcote, 1982; Dunning, 1999) have explained how sport has become one of the remaining areas where violent conduct is permitted albeit within highly organised and legislated environments. Once part of the game of rugby, this contact has been limited hugely over the past few decades, with the fist fight almost entirely eradicated from that environment. Why then has hockey has retained the fist fight as a ‘tacitly permitted’ tool to resolve differences between players as others have de-sanctioned pugilism?

There are two over-riding reasons that emerge from the study of the sport and its culture. First, players see the fist fight as being a functional way of reducing the tension that inevitably surfaces when playing a contact sport in the enclosed space of an ice rink, particularly when you factor in the fact that the players are carrying a potential weapon in the form of a stick – not to mention the blades on their skates. Players often consider the fist-fight as being a tool of harm reduction, by holding players accountable for their other violent actions in the game. Hockey retains the job-title ‘enforcer’ for those players most likely to take on a physical role, with enforcers often given titles such as, ‘The Sheriff’, ‘The Policeman’ or ‘Weapon X’. Referees also accept the fist-fight as a way of policing the game in a manner that assists their own officiating. While enforcers can be worshipped for their role on the ice, they are also vilified for their conduct and ridiculed as ‘Goons’, there is a clear discourse of the fist fight being a tool of harm reduction and serving the function of reducing other forms of illegal violence within the game. 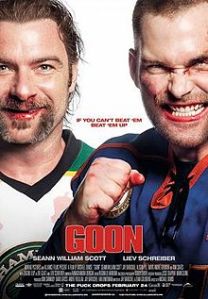 The second reason is that in short, violence sells. There is a strong link between attendance at hockey games and a desire to view violence in the game. As these advertisements demonstrate, the opportunity to witness violence is a key selling point for the sport in the UK. 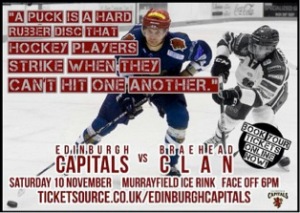 When there is a clear financial incentive to allow for violent conduct in the game, with team owners having a vested interest in its continuance, the commodification of players and of the sport in the UK at the professional level is therefore integral to the issue of fighting. It is essential to address the issue of power imbalance here and question who is gaining status in the form of money or power from players’ use of violence on the ice.

The uniqueness of hockey’s legitimisation of violence

Professional hockey has been presented as a sport in which high levels of violence are displayed. Indeed, hockey is unique in its legitimisation of the fist-fight within the game and in that it serves the purpose of reducing other incidences of violence in the game. Although there is no doubt that bare-knuckle fist-fights are neither legal outside of the game, nor within the game, they remain accepted, albeit tacitly, by the imposition of only a small penalty and in terms of how both the news and fictional media present fighting as being a part of the game. The social and legal aspects of this have changed in other contact sports. Rugby Union, for example, has largely eradicated fist fights between players through the impositions of penalties and punishments which deter their use. While other sports have attempted to clean-up the violent nature of the game, this has not occurred in hockey to date, making it a unique field of study.

The unique nature of violence in hockey is such that it is important to consider whether this behaviour is labelled as being ‘criminal’, ‘deviant’, or otherwise by participants as well as those who observe the game. In hockey, violent behaviour is not labelled as criminal by those who use it, but it is inherently deviant in the sense that it is labelled as thus by its punishment within the rules of the game. An understanding of this behaviour, the social interaction of those engaged in the sport, and of the ways in which the sport is socially constructed is essential and benefits from drawing on both sociological and criminological traditions.

Bernstein, R (2006) The Code: The Unwritten Rules of Fighting and Retaliation in the NHL. Chicago, Il: Triumph.

Colburn, K. (1986), Deviance and Legitimacy in Ice Hockey: A Micro-Structural Theory of Violence. The Sociological Quarterly, 27: 63–74