By Alistair Fraser, University of Glasgow

The following extract is excerpted from chapter six of the book ‘Urban Legends: Gang Identity in the Post-Industrial City’ (Oxford: Oxford University Press). The chapter, titled ‘Learning to Leisure’ (pp. 139-164) traces the leisure lives of a group of young men from Langview, a deindustrialised working-class community in Glasgow. The boys – aged 14-16 during the period of fieldwork – demonstrated a clear desire for traditional forms of work and leisure, but found opportunities for both thin on the ground. As a result, their leisure lives often resulted in friction with the ‘new Glasgow’, which privileges privatised, commercialised and delocalised leisure.

“A constant refrain of the children and young people I met in Langview – be it in LYP, on the street, in school, or elsewhere – was ‘this is pure borin’. On further prompting, this was frequently followed by ‘there’s nuthin tae dae’, or ‘there’s nivir any’hin tae dae’. The implication was not literal – in every case, there were options – but rather that everything there was to do had been done a hundred times before, and was therefore completely drained of any novelty, value, or creative potential. The streets had been walked a thousand times; the youth projects, shops, and public spaces visited and revisited until there was nothing left to excite any interest. In this context, the phrase ‘fir the buzz’ – for the excitement, for a laugh, for the sheer hell of it – is pivotal. When leisure time is spent in a constant round of dull monotony, exciting moments of spontaneity take on special significance. Whether it is pushing the edges of rules and acceptable behaviour in a youth project, testing security guards and police in commercial venues, or creating edgy excitement in public space, the group engage in activities ‘fir the buzz’; as a means of creating energy and spontaneity in a landscape of boredom.

… Where various forms of leisure were once easily and cheaply available in local areas, these spaces have largely been replaced by out-of-town entertainment and shopping complexes, each containing the same multinational shops and restaurants. In addition, new digital leisure spaces have become mainstream, providing new opportunities for private, home-based communication and excitement. It might be imagined that youth leisure would move in-step with these changes, replacing old forms of leisure with new, and acceding to these new field arrangements. However, the Langview Boys demonstrated a clear desire not only for continuity in their leisure pursuits – finding ways of reproducing leisure habits in this new environment – but also in creating ‘fir the buzz’ excitement in the new cathedrals of consumerism. Their leisure activities therefore did not represent a clear or definable ‘break’ with previous generations, but a dialectical process of old and new, learning and reimagining.

…This shift in work and leisure is symbolised powerfully in the changes to one of the former industrial centres of Glasgow, the Parkhead Forge. The Forge was one of many large-scale hubs of industrial production that used to pattern the city of Glasgow. Employing over 20,000 at its peak in the early twentieth-century, and covering a site of some 25 acres, the Forge was integral to Glasgow’s shipbuilding economy; forging steel and iron plates for the ‘Clyde-built’ shipyards of Govan. The Forge finally closed its gates in 1976; in effect closing the door to Glasgow’s industrial past, leaving generations of skilled workers out in the cold. In a powerful piece of symbolism, as the City Council set about an aggressive strategy of neoliberal place-marketing and regeneration (McLeod 2002; Paton et al 2012), the site reopened as the Forge Shopping Centre in the late 1980s. In both a physical and metaphoric sense, shopping was feted as a replacement for industry (Charlesworth 2000). The workers were no longer left out in the cold, but beckoned into the airless warmth of consumerism. 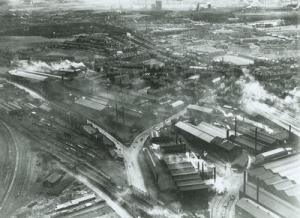 … In their search for edgework experiences, these new commercial spaces play a dual role for the Langview Boys – as centres for boredom-relief through consumption, and as spaces bound by rules and constraints that can be subverted and played with. Commercial spaces are viewed in the same light as public spaces, but with an added edge of control, authority, and supervision in the form of surveillance and security. As Presdee argues: ‘Young people, cut off from normal consumer power, invade the space of those with consumer power …. the ‘space invaders’ of the 1990s, lost in a world of dislocation and excitement; a space where they should not be’ (Presdee 1994: 182).   As Gary and Mark describe:

Gary: We aw got a chase in Princes Square [high-end shopping mall], we aw got a game ae [man-] hunt an that so we could get a chase aff the security guard.

AF: Did yous get a chase?

Gary: Naw, no really. They tried tae run, bit they jist did walkin.

Willie: See the couches? The couches you sit in. See Daz, he wis pushin Frankie oan wan ae they wee couches, an see they escalators, the wans that go doon, he pushed him oan that oan the couch. We wur aw laughin an that. 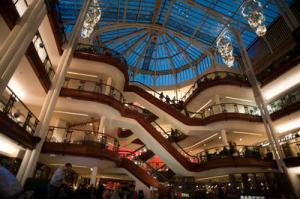 Interior of the shopping mall at the Princes Square Shopping Centre, Glasgow

The Boys’ discussed doing this kind of thing repeatedly, in a number of different locations, but Princes Square is particularly symbolic of the ‘new Glasgow’ that has little place for young people like the Langview Boys. Princes Square, in the city centre of Glasgow, stands as a cogent example of the tensions involved in the ‘New Glasgow’… Whilst it may be a stretch to present The Langview Boys’ use of Princes Square as a playground as a noble effort to subvert the ‘new Glasgow’ that has marginalised their leisure, their behaviour undoubtedly offers a striking example of the consequences of changes in youth leisure over the past 40 years.”

Reproduced with permission of publisher. For more information on the book and further excerpts, see: http://ukcatalogue.oup.com/product/9780198728610.do

One thought on “(Getting a) Malling: Youth, consumption and leisure in the ‘new Glasgow’”