Parcours: ‘l’art du deplacement’ is, most simplistically, a physical training methodology in which one uses only their body to overcome physical and mental obstacles in urban space and travel from point A to point B in the most direct and efficient way possible, irrespective of what is in one’s way (Angel, 2011; Mould, 2009). This can involve leaping between walls, climbing buildings, vaulting ledges, balancing along rails, flipping across gaps, and any other movement in order to fluidly move through the environment. It is a way of re-appropriating and re-inventing taken for granted objects and structures, reimagining the potential for urban space, reimagining ourselves in urban space and how we might connect with the city in a different way.

Parkour, therefore has been seen as exercising what Henri Lefebvre called ‘the right to the city’ (Harvey, 2008). The right to the city is more than merely having the right to access urban resources, but moves toward exercising the right to remake ourselves by reshaping the processes of urbanisation in the city. As life in urban centres becomes increasingly homogeneous and restricted as a result of the privatisation and organisation of the city around consumption, parkour has been seen as a practice which performatively displays an alternative vision of urbanisation, one which is more democratised, spontaneous, and free-for-all as it exercises its right to the city through re-appropriating capitalist spaces. Consequently, it has been described by scholars as a form of urban anti-capitalist resistance (Atkinson, 2009; Daskalaki et al, 2008).

Last month at the National Deviancy Conference in Middlesborough, I refuted this popular conceptualisation of parkour. Any political potential of parkour is being atomised through its commercialisation in blockbuster films and adverts; its subsequent sportification through parkour events, gyms and governing bodies; and the way in which it is marketed as a lifestyle to be consumed through clothing brands, DVDs and other merchandise. Instead of ignoring these processes of ‘political impotence through incorporation’ (Ferrell et al, 2008: 19) and clinging to the notion of these young people as class-conscious activists, criminologists must interrogate them. In doing so, we can more effectively reveal the dynamics through which the consumer market, and its role in the organisation and control of urban space, is dictating the social contexts in which parkour is legitimated as leisure and criminalised as deviant. Moreover, we can then look more closely at how the continued commodification of parkour influences the social distribution of those traceurs identified and controlled as ‘deviant’ and those who are ‘legitimate’, and how these processes protect and preserve the existing consumer-centric process of urbanisation which is so critical to the current urban political economy.

The practice and control of parkour exists at the very heart of the nexus between deviance and leisure, as traceurs worldwide porously cross and re-cross the boundary of ‘legitimacy’ and ‘deviance’ in shifting spatial contexts. It is a discipline of minor (if any) social harm, yet it is policed with vigour through a range of agencies. An interrogation of its everyday practice, its control, and its spectacular co-option is imperative if criminologists are to critique the role in which interrelated spatial, cultural, and economic contexts are shaping the muddled and contradictory landscape of deviance and cultural norms and values in urban space.

The everyday practice of parkour is stridently controlled, prohibited and excluded from urban spaces. In the increasingly privatised and consumption-based city centre of Newcastle there are seemingly endless reams of private security teams, council authorities, and police officers who consistently move groups of young traceurs on with threats of pressing charges for trespassing, public order offences, and vandalism. The traceurs’ playful and creative right to practice parkour is placed in opposition to, and predictably trumped by, the protection of private property and the mandate of the contemporary urban planner to ‘keep space to its specificity’ (Hayward, 2004; 2012). Many cities in the UK, including Newcastle, are employing anti-climb paint, and police frequently confiscate the memory cards from traceurs’ cameras. Some councils in the UK have banned parkour entirely (see the video below), while in certain areas of New York City and on university campuses in the US parkour is prohibited with a penalty of a fine of up to $300 (Angel, 2011).

Commodification and ‘Sportification’ of Parkour

Nevertheless, the creative, imaginative, and risk-taking practice of parkour arguably possesses and exhibits many of the values and characteristics which are valued by the intense neoliberal individualistic and entrepreneurial ethic; evidenced by the rise of speculative risk-taking on the stock and housing markets, the promotion of excitement and hedonism in leisure, and the rise of the adventure and edgework industries (Hall et al, 2008; Holyfield et al, 2005). Unsurprisingly then, the spectacle of parkour has been employed in movies (Casino Royale, 2006) and adverts for Nike, Epson, Toyota, and Sprite among others. The increasing ‘sportification’ of parkour runs parallel to these commercial developments (see Wheaton, 2013). Parkour now has a governing body, Parkour UK, and special parkour ‘events’ are organised with city councils,along with several parkour gyms opening up around the country—most notably in London, Liverpool, Milton Keynes, and Kent.

Therefore, the simultaneous embracing and prohibition of parkour requires an examination of the social and spatial contexts of these cultural norms and values which permeate ‘deviant leisure’, and parkour in particular. For example, the sportification of parkour through the opening of ‘parkour gyms’ and classes situates the practice within the market and a ‘hierarchical structure of risk’. The risk-taking of parkour is subjected to forms of risk-management, in which parkour is placed within specific boundaries of time (definitive ‘start’ and ‘end’ point) and space (venue), with officially qualified coaches as responsible invigilators, medical personnel on-hand for injuries, and appropriate insurance and even liability waivers to risk-manage and control the practice of parkour (see Holyfield et al, 2005). All for a ‘nominal’ fee, of course. 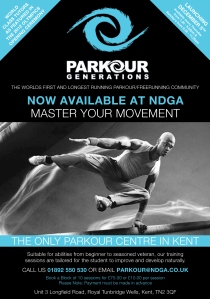 However, in doing so the market comes to dictate the social context in which parkour is deemed as legitimate or deviant. In creating these spaces of legitimacy, it intensifies and highlights its illegitimacy elsewhere (Chui, 2009). Within these market-sanctioned spaces, traceurs are enabled and constructed as responsible, considerate, and protected risk-takers. However, when practiced freely and imaginatively in the city in concurrence with its origins, traceurs become feckless, irresponsible, anti-social and inconsiderate risk-takers who disrupt and disturb others’ trying to enjoy the city in the proper (i.e. consumer) way.

This simultaneous celebration and criminalisation of the cultural values of risk-taking, creativity, and uncertainty is indicative of the many of the contradictions within capitalism itself. However, most concerning is that this muddled notion of deviance is not experienced evenly. Rather, it is structured according to geographical location, age, gender, and financial resources. The vast majority of my participants are between the ages of 14 and 21 and either in full-time secondary education with limited spending allowance, or have left school and are in part-time, low-wage, tedious employment, or they are unemployed altogether. They have a very limited capacity to participate conventionally in the consumption-based city centre of Newcastle which is organised around shopping, restaurants, and it’s now infamous night-time economy. One of the attractions of parkour was that it allowed a way for them to experience fun, excitement, adventure, and a community of like-minded individuals which was largely independent of the need for purchasing power (Atkinson, 2009). However, as parkour increases in popularity and becomes more embedded in public consciousness, so will its practice likely become contingent upon an ability to pay the price of admission. The casualties of parkour’s commercialisation—and therefore the targets of its amplified criminalisation in urban space—will inevitably be the usual suspects who consistently emerge as the losers in the resultant debris of capitalist accumulation.

Looking Ahead: The problem of de-politicised traceurs

Looking ahead, many traceurs (my participants included) believe that parkour will gain legitimacy within urban space. They encourage, support, and are enthusiastic about the publicity of parkour in adverts, films, and the opening of parkour gyms; believing that increased awareness will lead to enhanced freedom (see American Parkour forum responses to the ban in Moreton, references below). This fundamental misunderstanding of the influence of neoliberal global capitalism in shaping the urban, co-opting practices such as parkour, and the implications it has for their freedom in urban space is indicative of a wider problem of a de-politicised pseudo-pacified electorate (Winlow, 2012), and paints a concerning picture for what forms of resistance the parkour community, as it’s currently constituted, could formulate to preserve and enhance the practice of parkour in urban space. Critical and cultural criminology certainly have the capacity to combine political-economic and spatial analysis to critique these on-going developments in urban spaces (Campbell, 2013; Hayward, 2004; 2012). However, as Walter DeKeseredy mentioned in his blog post here, critical criminologists must also engage in ‘newsmaking’ criminology (Barak, 2007) in order to have an influential voice for the wider public to hear regarding the political, economic, and cultural issues in contemporary society.

The concept of ‘deviance’ is also a great deal more complicated under these contemporary conditions. There seems to be both a broadening and a shrinking of those behaviours considered ‘deviant’, a confused picture. Practices such as parkour are experiencing increasing forms of control. Binge drinking within the night-time economy, on the other hand appears to flourish despite its relationship with violence and sexual violence and harassment. As Steve Hall has written regarding deviance:

“Whilst crime is restricted to actions or signs that exist beyond the boundaries set by law, ‘social deviance’ incorporates crime but also includes any legal action or sign deemed unacceptable by the social group” (Hall, 2012: 2).

‘Deemed unacceptable by the social group’ appears to be the operative phrase here. Traditionally we might consider how deviance comes to be defined by the ‘collective conscience’ or moral consensus of society which manifest in ‘moral panics’ around youth, graffiti, or binge drinking. The picture of deviance today is much less clear as the consumer capitalist market and its role in the process of urbanisation confuses what was an already blurred line between acceptable and unacceptable, deviance and leisure: with potentially harmful consequences.

Winlow S. (2012) ‘Is it OK to talk about capitalism again?’ in S. Winlow and R. Atkinson (Eds.) New Directions in Crime and Deviance. Abingdon, Oxon. Routledge.

2 thoughts on “Re-thinking Parkour as ‘Resistance’: How markets dictate the contextual deviance of parkour”